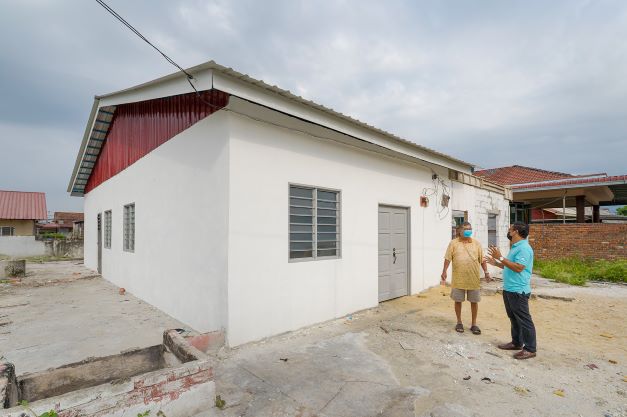 Heeding the victims’ cries for help, Kinta Properties has completely rebuilt one of the houses on Jalan Tawas while repairing the other on Lorong 9.

The commendable work was a joint CSR initiative with Majlis Bandaraya Ipoh (MBI) under the MBI Program Prihatin.

In thanking Kinta Properties, house owner Kok Tek Mee of Lorong 9, said it was as if she and her family had gotten a new home.

“We are very thankful to Kinta Properties. My husband has stayed here since he was young while I have made this my home since marrying my husband 17 years ago but the thought of renovating our house never occurred to us because we can’t afford it with my husband’s sole income as a factory worker.

“Kinta Properties has not only helped save our house, they have made it a new home for us.

“They did more than repair our roof, ceiling and beams that were damaged by the freak storm, they even obliged our requests to cement the porch, change a new gate and fence as well as tile our living room,” said the happy 51-year-old housewife.

“I’ve been living with my elder sister and now that this place is fully restored, I can move out and live on my own. It will be more comfortable for everyone.

“I am so happy and grateful to Kinta Properties. I would not have been able to afford to rebuild the house otherwise,” said Shum.

According to Kinta Properties director Edwin Tan Beow Aik, the developer had spent some RM80,000 on restoring the two houses, exceeding its initial budget of RM60,000.

“This is the second round of CSR efforts conducted by Kinta Properties after carrying out improvement and repair works worth RM40,000 on 44 other houses at nearby Taman Tasek Damai in February,” he said.

Syabas to Kinta Properties for being a caring and dependable developer.